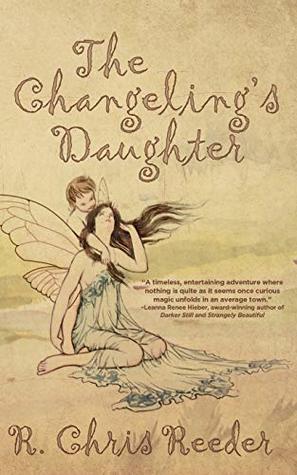 About the book
Fourteen-year-old Brynn McAwber discovers a terrible truth about herself and her family and must undergo a perilous quest to another world, to save a friend and redeem her soul.

Unusual things have been happening to Brynn McAwber. A strange little man keeps showing up at her door. She's being watched by a mysterious woman with a sword strapped to her back. And her body keeps...disappearing.

When Brynn discovers the terrible truth about herself and her family, she embarks on a perilous quest, which takes her far from Indiana, far from the world she knows, into the Land of Annwfyn, home of brownies and bwbachods, xanas and zephyrs, goblins and gods.

This is the story of a girl who finds out she's supposed to be the villain, but decides to be the hero anyway.

My review
A most unusual and amazing anti-hero questing fantasy not just for young people has arrived.

Up front caution: although I could watch this story unfolding in epic technicolor and would recommend it to teens with an advanced reading level, I caution parents who care that a fair amount of profanity when a couple of shock value uses would have been enough, some gore, and a generous vocabulary boost this story into a tween/early teen caution level. Some parents may want to check it out first.

For the rest of us, Reeder’s maiden fantasy is a delight. I admit I intended to read enough for a good review, but didn’t look up except for touchdowns during the Packers-Bears football game until I was finished. Using an anti-hero, in this case a typically-misunderstood creature of folklore hiding in plain sight, as a champion certainly isn’t new, but the author’s ability to recombine fantasy elements into a true hero’s journey makes for a fresh, entertaining read.

Brynn’s family secret stems not simply from their traditionally accepted roles but also how they are perceived by others. When Brynn’s best friend Makayla suddenly turns against her, Brynn’s loyalty and character are tested in ways that help her understand and grow into the kind of person she’s meant to become. Makayla’s defection is not the only weird thing happening to Brynn these days. When faced with disaster, Brynn’s options are to do the right thing by her friend no matter the odds, or be the expected generic typecast of her kind. Knowing Makayla would never willingly abandon her gives Brynn the strength to fight not just for physical rescue, but for the decision to live a meaningful, positive family lifestyle.

Told through the eyes of Brynn, the fourteen-year-old main character, The Changeling’s Daughter is a lovely adventure for readers who enjoy a good old-fashioned questing tale with surprising heroes unafraid to challenge even themselves.

R. Chris Reeder grew up in the Pacific Northwest, attended college in Walla Walla, Washington, and has lived and worked across the country and around the world.

He has had careers as a Shakespearean actor, an international courier, and a singing activist, but is now perfectly content in his current vocation of stay-at-home father.

He currently resides in Madison, Wisconsin, with his wife, two children, and a cat named Monster Jack.