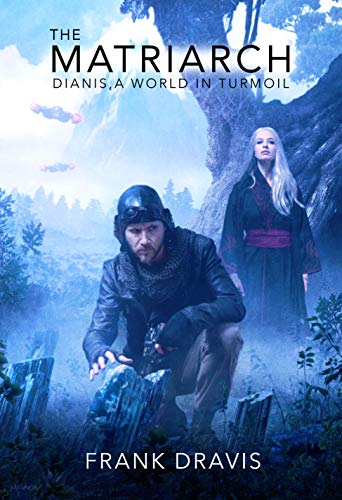 The Matriarch, book 2 in the Dianis, a World in Turmoil Chronicles
Frank Dravis
Epic Sci-fi/fantasy

About the Book
The second book in the Dianis, A World In Turmoil chronicles, The Matriarch, a sci-fi fantasy, centers on the protected planet of Dianis. In a sudden shift of federation policy the planet is stripped of its cultural observers and colonization control agents, but a single team circumvents the withdrawal and stays behind. Love, friendship, and career aspirations drive the members of the last remaining Interspecies Development Branch team.  In many ways The Matriarch can be compared to Dune. Both are on primitive backwater worlds with precious resources coveted by the galaxy. Both are protected by a caretaker organization, and both succumb to galactic intrigue and betrayal.

The IDB team has disappeared, and the Matrincy, the governing council of adepts has intervened seeking clues as to their whereabouts. In the absence of the IDB, Nordarken Mining has intruded in the planet in its quest for new sources of aquamarine, a strategic resource needed in the Turboii War. Before his disappearance, Chief Inspector Achelous of the IDB predicted Nordarken Mining, in the form of extrasolars, would invade the planet and they do.

The effort to defend Dianis from extrasolar incursions has attracted the attention of the powerful Paleowrights a major religious sect on Dianis. The Paleowrights covet the technologies that Achelous brought to Dianis and have begun to raid any suspected sites where Achelous and his team may be. The free peoples of Dianis are thus faced with two enemies: galactic conglomerates intent on stealing their resources and the provincial Paleowrights intent on suppressing their free will.

Becoming aware of the cosmic turmoil that surrounds her lover Achelous, Marisa, a trader princess and force of nature, learns more and more of Achelous's secrets: he is not the simple Dianis trader he pretended to be but an undercover agent for a secret monitoring organization of a galactic federation hundreds of years in advance of her own. Marisa loves Achelous, her son, and her country, but can she unravel the mystery of Achelous' disappearance in time to save him from Paleowright retribution?


My review
The world of Dianis holds more precious secrets than the desperately needed and highly sought aquamarine taken for granted by the planet’s inhabitants.

Once secluded and sheltered from a galaxy at war, matriarch herself, the leading adept, or a type of mind-reader, of the ruling federation council has taken an interest in the turmoil surrounding this planet. The federation's leading expert on Dianis, cultural anthropologist Archelus, chief inspector of Interspecies Development, has not only been found, but has committed a grievous misstep on the planet he's supposed to be observing. He's uncovered the surface secret that makes Dianis a prize to mining companies eager to profit from war, but also the darker secret that would destroy the balance of power in the federation.

Dianis is a complicated hierarchy of various species with several different moralities and faith values at odds--sound like another world we know? The mysterious but despised Paleowrights know something's amiss due to strange phenomena occurring on their world and will use any means to control the source of these powerful abilities. At war with the Life Believers and everyone else, they wreak havoc. The Matriarch goes undercover to the planet to determine the real interest in exploiting this little world. Who will win the battle over Dianis’s true treasure trove?

Told in multiple viewpoints in epic format from a boundless cast, it’s troglodytes, Timberkeeps, Paleowrights and various tribal peoples fight to defend their way of living and coping on Dianis, a small planet in the Margel Damansk Asteroid Cloud. At stake? The culture of Dianis. At greater stake? A battle for control of the galaxy. Fans of epic sci fi serials will enjoy this second episode in the World in Turmoil series. 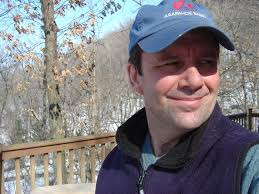 Living along the Mississippi River, Frank Dravis has leveraged his many life experiences to write The Foundry, the first book in the Dianis, A World In Turmoil series. He was born and raised in Detroit, Michigan where he and his father cruised the Great Lakes. His father often chose to go out on the lake when it was empty, on the roughest days. Frank spent six years in the US Navy chasing Soviet submarines during the Cold War. His love of the sea is reflected in The Foundry, a love he has shared with his wife and two girls.

A hunter, Frank has taken game with a variety of weapons, including the bow, rifle, shotgun, and muzzleloader, the weapon modeled in The Foundry and used as the tool of choice in the fight against corsairs in The Citadel.

He assists his wife in her passion for horses as stable hand and the sole rider of Shaboom their willful appaloosa. Equines appear regularly in the Dianis series, not as horses, but as eenus.

Frank's care for Earth and the stewardship of their land in Wisconsin are reflected in the culture and ethos of the Timberkeeps.

He has two degrees, a Bachelor of Computer Science and a Master of Business Administration. Those degrees have been integral to his professional life where he has worked in a variety of roles from software engineer, to marketing executive, to chief information officer, at such prominent firms as SAP and Organic Valley. The technical and scientific acumen he gained through those endeavors is demonstrated in the series in the effort to make the Dianis brand of science practically possible somewhere in the galaxy today.